Today's update of War Worlds has two big improvements. The first is there's a new "tactical" view of the starfield, which should generally be much better performing. You can see an example of it here: 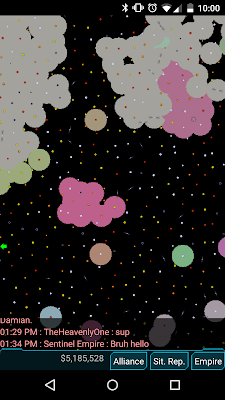 That's what you'll see when fully zoomed out, the circles will fade away and the labels/icons will fade back in as you zoom in. You'll also notice that scrolling has been completely fixed, and you don't get that weird jumping around that you used to get in previous release. Man, that one had been bugging me for ages!

Also fixed in this release is the purchase of shields and empire names. In previous versions, if a shield change failed to be applied due to an error on the server (recently I had an issue where the server had run out of space, so all uploads were failing) the client would still "consume" the purchase and you would have been charged. Obviously that's not a great experience, so now purchases are only consumed once the client gets confirmation from the server that the change actually applied. If you get an error, you can retry without being charged again. (I should note, if you continue to get errors, please email me with your empire name and the change you want to make... I'm quite happy to do these for free if the purchase fails)

But by far the biggest change in this release is the addition of the Wormhole Disruptor building. This is a building you can build on your star, and it allows you to "disrupt" (either destroy or take over) wormholes nearby. 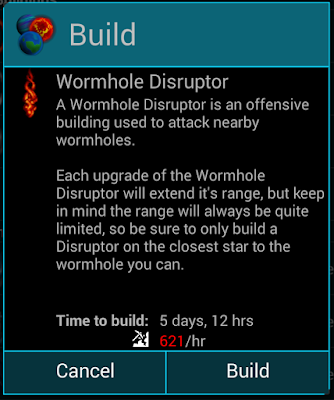 Note that because it's a building you build on a star, in order to take over an enemy wormhole there is actually quite a bit of work you need to first. You need to take over a star near the target wormhole, build a disruptor on it, then upgrade it so that has enough range to reach the wormhole. You can see the range of your wormhole disruptor in red on the starfield view: 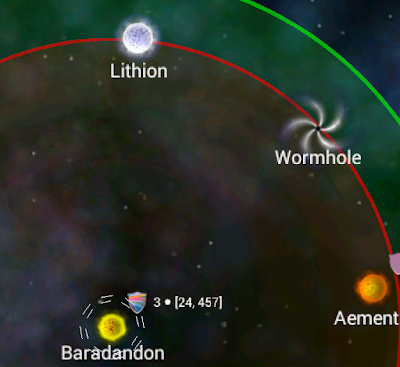 Once your wormhole disruptor is upgraded enough, two new buttons will be enabled on the enemy's wormhole screen, "Take over" and "Destroy":

The two buttons do what you would expect, "Take over" allows you to take ownership of the wormhole yourself, you can then tune it to one of your alliance's wormholes (if it's already tuned when you take over, the tuning will be reset). Destroy will simply destroy the wormhole (and any ships that are currently at the wormhole will also be destroyed!)

Some other improvements have been made to wormholes as well. You can now see who owns a wormhole when you select it in the starfield view, and there's also a "Locate" button which allows you to jump straight to the wormhole it's tuned to.

There's a bunch of other fixes in this release, head over to the github issue tracker for the complete list.